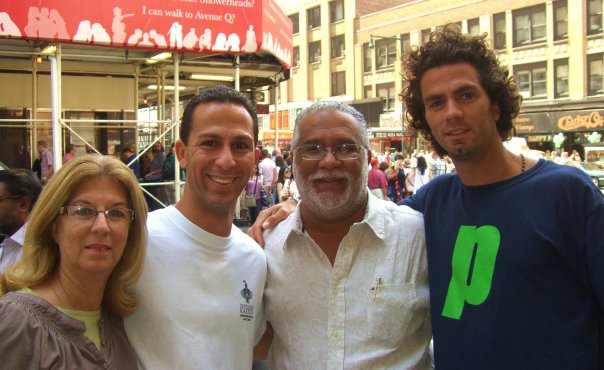 Randall and Nazira Rojer visited their son’s first US Open in 2009 and they so wanted to attend his 9th this year. Due to the Caribbean course of Hurricane Irma, they couldn’t get a flight on time to New York. They watched on TV Jean-Juliën Rojer winning the Grand Slam and are now the most happy and grateful parents.

Jean-Jamil and Jean-Juliën started playing tennis at an early age. It was for the parents almost immediately clear that they would need to invest time and money in the two talented boys. The eldest, Jean-Jamil, became a white batch umpire and oral surgeon and the youngest a professional tennis player.

The well known dentist Randall and the school teacher Nazira sustained both in their professional choices and invested in them. They worked hard to comply with their needs and believed in them and still do. So whatever the circumstances, good or difficult, the parents were there for both sons.

After Jean-Juliën did win his second Grand Slam -the fist one was Wimbledon 2015- the congratulations from family, friends and islanders poured in for the parents. So mr Rojer decided to address this ‘outpour of emotions’ in a Facebook post.

The very grateful father wrote: “I can’t express enough the many thanks, and the overwhelming outpour of emotions that we as a family have been receiving during this wonderful moment in our son’s, Jean-Julien Rojer, career.”

Mr Rojer stated that “since the start of this adventure in 1984, we have always hoped for the best for our son and it is never a guarantee that things will come out as one may have dreamed them up to be. Remembering the first US Open we went to when Juls for the first time made the draw and unfortunately did not make it past the first round. We are very grateful for all that has come since at this very wonderful venue/city of New York.”

“With unwavering faith in God, an incredible dedication to his body, a relentless drive for perfection, an ironclad work-ethic, and the perseverance through all that Jean-Julien has gone through, that is what makes moments like yesterday, like Roland Garros in 2014, like Wimbledon and Barclays in 2015 so very special in their own right.”

“Jean-Juliën plays with his nation of Curacao on his mind, in his heart and even woven into the lining of his shorts pockets, as he says: ‘To feel home every time I am reaching for these tennis balls in my pocket’… It is that kind of passion that drives Juls every day.”

“We, the Randall Rojer family, would like to thank from the bottom of our hearts all who has been on this journey with us. A thank you to those that have shared their congratulatory wishes. We would like to congratulate you all as a nation on this momentous occasion.”