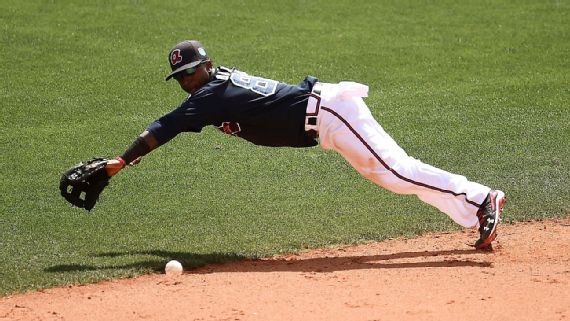 Ozzie Albies couldn’t help Atlanta Braves beat Los Angeles Dodgers in his debut: 2-3. The Curaçao native went hitless in 2 at bat, but scored a run. He later on saw Kenley Jansen, also from Curaçao, struck out the side for his 28th save.

Debuting at 20 years, 206 days old, Albies is the youngest player to play for the Braves since pitcher Julio Teheran in 2011 (20 years, 100 days). Wilson Betemit was the last position player to done a Braves uniform so young, debuting at 19-years-old in 2001.

The Braves’ No. 2 prospect, Albies received the much-anticipated callup prior to the team’s series opener against the Los Angeles Dodgers at SunTrust Park.

Albies, official name Ozhaino Jurdy Jiandro, carpooled to the park with fellow rookie infielder Johan Camargo. Camargo, who played with Albies in Triple-A, has been a frequent contact inside the big-league clubhouse. Albies talked with him every day, rooting him on and picking his mind about the majors.

He stole 21 bases in 23 attempts (fifth most in the International League), adding a speed element otherwise lacking on the major league club. His eight triples led the league and his 117 hits tied him atop the leaderboard.

Albies is the 15th Curacao native to play in the majors and the fifth to play for Atlanta, joining Andruw Jones, Andrelton Simmons, Randall Simon and Jair Jurrjens.

Initially a shortstop, the Braves moved Albies to second base to complete what they envisioned as an eventual Albies-Dansby Swanson infield duo. Swanson was demoted to Gwinnett last week, mired in a season-long sophomore slump.

Albies went without a hit in 2 at bat. He recieved base on balls in the 8th inning and scored. Braves scored twice, after trailing 0-3. Dodgers went on winning 3-2 with Jansen striking out the side in the 9th inning.