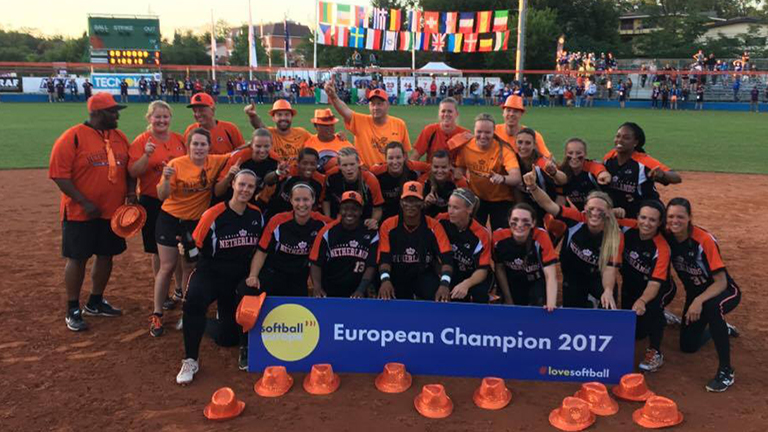 During the week the Dutch played twelve games and only one of those took the regular seven innings, all the remaining games ended prematurely on a run-ahead-rule (mercy rule). After the 2015 Championship, where the Dutch took silver medals, they proved this year again, that they are the strongest softball nation in Europe.

The only tight game the Dutch played during the tournament was the semifinal game against Italy. The only run of that game was scored after both Karin Tuk and Brenda Beers singled, and the next two batters (Britt Vonk and Chantal Versluis) were hit by a pitch then, which made the only run score.

The final game was taken over by the Dutch in the first inning already – they scored three runs after a few hits and a few inaccuracies by the Italians. The Netherlands kept adding runs in the next innings too.

By the time both sides had completed their third innings, The Netherlands were 6-1 up and a single in the fifth completed the rout for them. Italy only scored once after a base-on-balls and Piancastelli’s two-base hit. The final score was 7:1 for the Netherlands.

Britt Vonk hit a homerun in the final game, the pitchers in the game for the Netherlands were: Ginger de Weert, and Rebecca Soumeru. Three Italian pitchers tried to stop the orange offence: Gretta Cecchetti, Illaria Cacciamani, Alice Nicolini.

Softball will be returning to the Olympic Games sports programme at Tokyo 2020 for the first time in 12 years. In the four previous Games were the sport featured, no medal has been won by a European team. Italy’s fifth place at Sydney 2000 is the best performance from a European country.