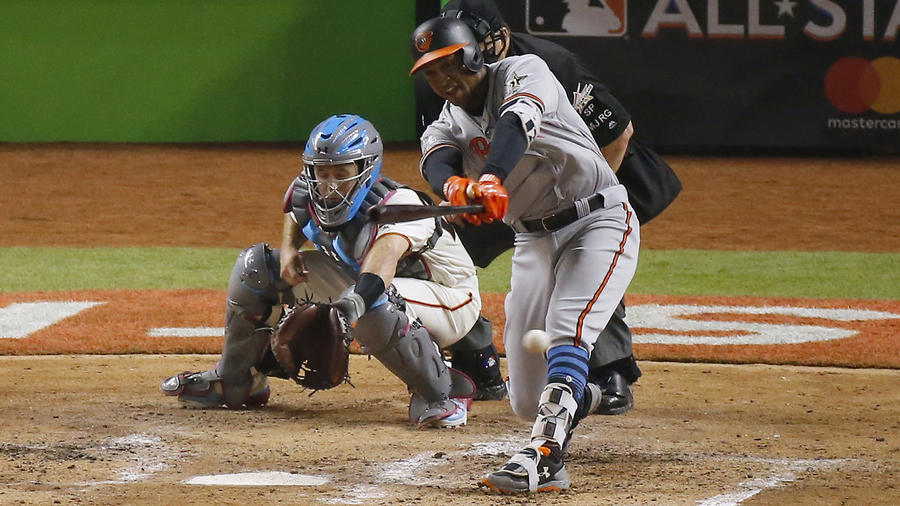 The Curaçao natives Jonathan Schoop and Kenley Jansen have delivered in the All Star Game (ASG). Didi Gregorius, also from Curaçao, and the Aruban Xander Bogaerts didn’t get enough votes to play in the game between the stars of the National and American League.

Schoop, the Orioles’ only representative this year, entered the game as a defensive replacement in the fourth inning and doubled in his first at-bat in the top of the fifth — fighting back from an 0-2 count against Los Angeles Dodgers left-hander Alex Wood.

The Curaçao native also had a big first for the American League team, scoring the first run of the game in that inning on a bloop single to right by Minnesota Twins third baseman Miguel Sano.

It didn’t hold up. The National League tied the game on a home run by Yadier Molina in the sixth and Mariners second baseman Robinson Cano homered in the 10th inning to give the American League a 2-1 victory.

Schoop also handled several defensive chances flawlessly at second base during the three innings he was in the game, then was replaced by Cano in the seventh.

He also made a nice tag to convert an outfield assist by Boston Red Sox center fielder Mookie Betts in the fourth inning, which could mean only one thing. Somewhere, Orioles manager Buck Showalter was telling someone that Schoop is a “great tagger” and crediting J.J. Hardy with helping him develop into fundamentally strong second baseman.

Top of the ninth: Kenley Jansen enters the game: 1-1. Yonder Alonso greeted the Curaçao native with a ground ball single off the glove of a diving Josh Harrison at second base. Alonso then stole second base, giving the American League the go-ahead run in scoring position with nobody out.

Jansen responded by striking out Nelson Cruz and Gary Sanchez swinging. He then tried to quick pitch Avisail Garcia, but a balk was called, advancing Alonso to third. No matter, as Jansen struck out Garcia swinging, and became the first Dodgers relief pitcher to strike out three in an All-Star Game.

The pitcher from Curaçao committed the ninth balk in All-Star history, and the first since Derek Lowe of the Red Sox in 2002. Jansen is the first Dodger to commit an All-Star balk. Jansen’s line: 1 IP, 1 hit, 3 strikeouts.