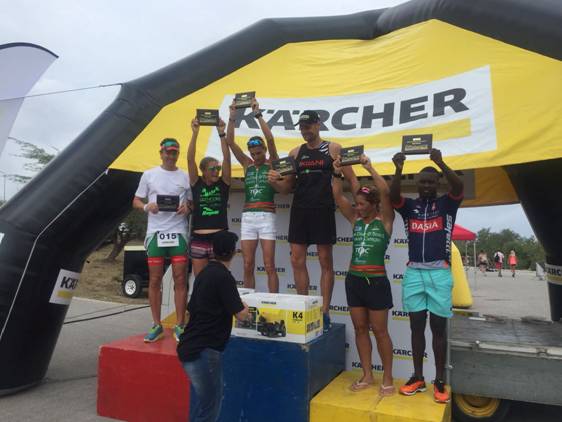 Yhousman David Perdomo Peña and Genesis Ruiz, both from Venezuela, won the Karcher Olympic Triathlon. They took home Sunday, 6 may, 2018, $1,000 USD each for their 1st place finishes.

Curaçao triathlon events have a habit of delivering strong performances and dramatic finishes. Sunday, may 6th, 2018, was no different thanks to a mix of solid local and international talent representing 8 countries.

A strong field of over 50 individual triathletes and 30 relay teams took to the cool waters of Santa Barbara Golf & Beach Resort early Sunday morning for the 8th annual Curaçao Olympic Triathlon sponsored by Karcher. With prizes of over $8,000 USD on the line, spirits were high and focused.

Conditions were good for the 1.5 km swim which circles two laps of the pier along beautiful Barbara beach. Team Puro swim member Alberto summed up the swim: “It was cold when you got in, but things warmed up by the second lap. The water was pretty calm…great for racing”. The sun eventually came out as racers began the run but strong winds played a roll throughout the entire race.

Both of the sole Venezuelan entrants hailed from club Bikepro and each one claimed 1st overall in the Men’s’ and Women’s fields. Yhousman David Perdomo Peña and Genesis Ruiz, from the 16-29 age category delivered dominating performances both overall and in their age categories thanks to strong opening swims. The two young triathletes sprayed champagne atop the podium and took home $1,000 USD each for their 1st place finishes.

In what will most likely be her final Curaçao race (for the near future), Iron Man 70.3 Women’s World Champion Marlies Kort placed 2nd overall in the Female division and first in the Female 40-49 division, capturing the Curacao National Champion title in the process.

Former pro Mirjam Weerd had maintained a tight lead up until the run portion where Kort’s signature foot speed gave her the winning edge. Both athletes finished with respectable times well under 2:30:00.

Another dramatic finish on the men’s side came from none-other than Remco Osnabrugge, who in the final 50 meters of the race was neck and neck in a full out sprint for 6th with fellow Curaçao resident Sandro Martin. The crowd of spectators cheered as the two barreled towards the finish line. But today was Martin’s day, finishing a half meter and half a second ahead of Osnabrugge, claiming second overall in the Male 16-29 division and third overall in the Curacao National Championship. Young gun Ole Colenbrander (CUR) passed Gijs Fritjers (NED) in the third lap of the race to capture third and a podium place in the same 16-29 division.

In his second impressive performance in Curaçao this season, expecting father Cory Giesselman (CUR) delivered a 2:19:32 overall time to reach fourth overall and second in his age group 4 seconds off third place and 12 minutes ahead of third place 40-49 finisher Richard Koss. Richard used the race to warm up for his upcoming full Iron Man in Boulder Colorado USA this June.

The international athletes did not left empty handed. A number of relay teams and individuals made the trek from neighboring Aruba. Two individuals stood out in particular; Romar Arendsz, who won the 30-39 Male age group, and Amandee Nicolaas who was the fourth overall Female to finish. Visiting Dutch triathlete Jan Moerings lead a delegation of three racers from the Netherlands’ team Toga. Moerings not only won fifth overall Male but also his Male 50+ age division.

Organizers like to hype the zone between the finish line and the bike transition as having a party-type atmosphere and they achieved that vibe again this year. In-race commentary and updates were delivered live by Curaçao’s own two-time Iron Man finisher Chris Curtin and music was provided by the ever-steady DJ Wimpy.

The CTA and its timing committee produced its first ever live time race where the audience could track athletes’ progress throughout the race. “Seeing the live updates on the screen, seeing who was coming in and hearing Chris’s updates gave you the race in real time…it made the whole thing exciting to watch” commented one party-zone spectator.

As the award ceremony ended, Curaçao National Champion winner and 2nd overall Male Finisher Rik Nijhoving surprised the crowd when he grabbed the mic from Curtin. He handed his cash prize to a colleague in uniform who, along with a number of fellow Dutch Marines, had help set up and take down the race. Nijhoving thanked the Marine for all his help and handed him his check. It was a great moment for Curaçao Triathlon in a Sunday morning that was absolutely full of them.